Rare tortoises, nesting and migratory birds, unique lizards and a variety of mammals are set to benefit from the recent purchase of a 18,850-acre former cattle ranch, Rancho Guimbalete, in Mexico’s Chihuahuan Desert. Rainforest Trust, Turtle Conservancy and its local affiliate HABIO, A.C. and Global Wildlife Conservation (GWC) partnered on a deal to purchase the ranch, which will be converted into a desert wildlife refuge.

Rancho Guimbalete, which is in the state of Coahuila on the northern edge of the Bolsón de Mapimí Biosphere Reserve, covers a large tract of mostly undamaged Chihuahuan desert vegetation and is home to a range of resident and migratory wildlife. This includes the Critically Endangered Bolson Tortoise, which “was recently uplisted from Vulnerable to Critically Endangered by the International Union for Conservation of Nature,” said Stephanie Wester, Latin America Conservation Officer at Rainforest Trust. “It is incredible that over 18,000 acres are now protected for this species and other wildlife.” 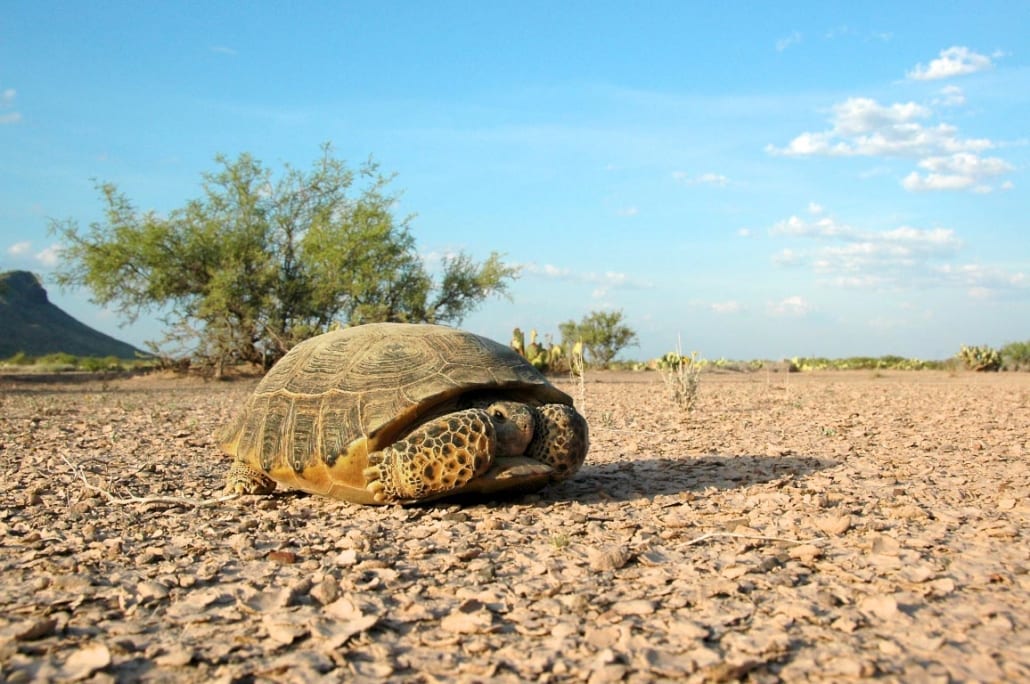 Rancho Guimbalete is also home to lizards that live only in the local sand dunes, nesting birds and migratory birds that stop to feed and rest at the seasonal wetlands and a variety of resident mammals, such as kangaroo rats, Mule Deer and Pumas. The ranch is also home to an incredible diversity of cacti, herbs and shrub species.

“Wild desert landscapes all over northern Mexico are being lost to overgrazing and, even worse, conversion to irrigated crop agriculture,” said Eric Goode, president of Turtle Conservancy. “These drylands cannot sustain agriculture for very long. But when exploiting them, native plants and animals are lost, and the landscape is forever changed for the worse. We lose wilderness, and we can never replace that.”

Under the leadership of HABIO, A.C., a Mexican NGO dedicated to biodiversity conservation in the country’s northern deserts, the ranch will now be managed primarily to protect the biodiversity found there. The ranch will also serve as a buffer zone for the neighboring Bolsón de Mapimí Biosphere Reserve, which the Mexican government established in 1977 and is a candidate Key Biodiversity Area. The site of global importance for the persistence of biodiversity.

“We are particularly grateful to the previous owners of the ranch, who used it to raise cattle but did it in an environmentally sensitive way,” said Peter Paul van Dijk, a senior associate scientist with GWC. “They prevented overgrazing and resisted the temptation to introduce damaging non-native grass species as fodder for their cows. Their care for the land safeguarded its biodiversity.”

In addition to putting an end to cattle grazing — which will help spur the recovery of grasslands habitat — HABIO, A.C. will implement management strategies that minimize erosion, encourage vegetation recovery, increase water availability for native wildlife and prevent agricultural land use.

“The purchase of Rancho Guimbalete by HABIO, so that it can be managed in the future for biodiversity conservation, represents a significant step forward for the conservation of the Bolsón de Mapimi’s unique biology and landscape,” said Judith Rios, treasurer of HABIO, A.C.

As many as 200 bird species, 70 mammal species, and 50 reptile and amphibian species potentially live in or use the ranch habitat, though future surveys will confirm the exact number of species that will benefit from the protection of the ranch. Habitat destruction and poaching are the biggest threats to the wildlife that live here, in addition to more severe droughts that result from climate change.

This purchase was made possible through the generous support of the Rainforest Trust Conservation Action Fund and SAVES Challenge, the Turtle Conservancy and Global Wildlife Conservation.

Increased Protection for Orchids and Birds in Ecuador
Scroll to top
This site uses cookies: Find out more.